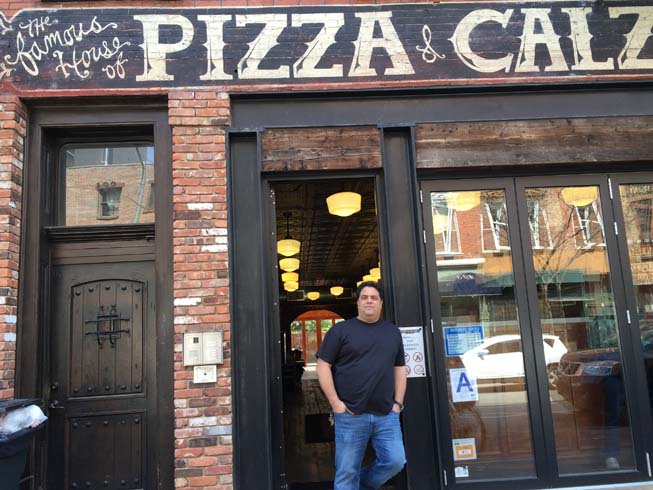 Expectations run high with a sign that reads “The famous House of Pizza & Calzone” above the pizzeria’s entrance in South Brooklyn, New York.

Paul DiAgostino and Gino Vitale bought House of Pizza in 2004, but this slice house had a treasured history long before the two came into the picture.

House of Pizza & Calzone has stood on Union Street in Brooklyn since the 1950s. The pizzeria, originally named Simone’s, opened in 1952. Shortly after, two Italian immigrant friends (Giovanni and Onofrio) who worked at the shop purchased it and changed its name.

In the beginning, House of Pizza & Calzone served traditional New York-style pizza slices with two options — sausage or mushroom — and fried calzones (a hit with the working-class neighborhood and the shore men from the Columbia waterfront shipping ports). Fried calzones were, and still are, unique. The two friends brought the frying technique from the Apuglia region of southern Italy. “They had a huge wok and they would turn them with drumsticks,” DiAgostino says.

The slice shop’s popularity grew, becoming a neighborhood mainstay through the years. Giovanni and Onofrio continued to own and operate House of Pizza & Calzone until they sold the business to DiAgostino and Vitale in the 2000s.

DiAgostino and Vitale were well aware of the House of Pizza & Calzone before the purchase. When it became available, they jumped at the opportunity, though decades of established loyalty in the neighborhood put a lot of pressure on the new owners, DiAgostino says. “When you come into an establishment that has been here so long, our fear was what can we change and what do we have to keep the same,” he says, “People don’t like change. The biggest challenge, I think, was overcoming the tag of being the next guy or not the original guy. It was definitely our fear in the beginning.”

When DiAgostino and Vitale took over the business, having the original recipes aided them in gaining neighborhood acceptance. “We weren’t sure how much they were going to pass over to us,” DiAgostino says of the original recipes. “So one day just having a conversation, I ask them, ‘Are you willing to give us your recipes?’ He was touched by it. He thought we just wanted to come in and ‘get out of the way, it’s our turn.’ What they did here for 50 years worked. Why change it?”

And House of Pizza & Calzone continued as it was for a few years with DiAgostino and Vitale’s minor additions and personal touches. That was until, DiAgostino says, they kept hitting obstacles when they needed to make repairs on the hundred-year-old building. “All of the plumbing, electrical, HVAC, a lot of stuff was just old and outdated,” he says. “When you called the trades to come out and look at it, they would go, ‘there is nothing to do here, you got to take it out.’”

The pizzeria was tiny with only four tables, mainly a pickup window and counter service. Coupling the size with maintenance issues, the owners gutted the space for a total renovation in 2008. The construction was done in just five short weeks thanks to Vitale’s background in the construction and real estate industries. They opened up the back of the store to add a dining room and outdoor seating, which combined seats 50.

The remodel was completed to showcase reclaimed neighborhood materials including brick walls, a tin ceiling and wood floors and beams.

A face lift to the exterior features sliding windows. A large block of salvaged wood sits atop vertical steel beams. “We wanted to go for the look of the steel and the wood, which is more working class,” DiAgostino says.

One showpiece of the entrance is a throwback hand-painted sign.

With the expansion, House of Pizza & Calzone also broadened its menu with more pizza options, as well as sandwiches, panini, pastas and deserts.

In addition to the original-recipe, New York-style pizza, the pizzeria has also received acclaim for its Sicilian Pizza. A crowd favorite is the Upside-Down, pan-baked thick crust pizza layered with fresh mozzarella on the bottom and topped with tomato sauce, and finished with grated Romano cheese and olive oil ($25). The Grandma’s Pizza has a huge following — a thin crust, pan-baked pizza with a whole peeled tomato sauce made with garlic and basil and topped with mozzarella ($18).

The 60-year-old calzone recipe has remained the same — pocket-shaped dough stuffed with ricotta, mozzarella and ham, and deep-fried until crispy golden brown ($5.50).

A testament to their efforts to pay homage to the previous owners happens every Saturday. “People who were born and raised here, even the ones who no longer live here, they hold that loyalty,” DiAgostino says. “Saturday, we call it “pilgrimage day” because they all tend to congregate in the same places here that still exist from when they were kids.

The previous owners, who DiAgostino refers to as the old timers, still drop by the restaurant, too.

In the coming months, the House of Pizza & Calzone is set to add a full-service component to the counter business. “We both decided the next natural step is to take what we got and offer more along the lines of family dining,” DiAgostino says. “Good food at good prices and just put it out there everyday on a consistent level.”
DiAgostino says they’ve added a full-sized prep kitchen in the basement and a display kitchen in the dining area in the back of the restaurant, featuring a wood-fired oven. He wasn’t ready to divulge what style of pizza, but he hinted about the concept’s direction. “The slice business is something that I always want to keep,” he says, adding that the full-service kitchen will operate at night.

Let’s have the biggest Pizza Expo ever! We’re expecting more than 9,000 pizzeria owners and operators to converge on the West Hall of the Las Vegas Convention Center on March 28-30. With so much packed into the week, we’re here to get you ready

Fill your February Calendar with Key Dates, Observances and Food Holidays February may be the shortest month of the year. It is also packed with observances, food holidays and one of the biggest pizza sales days of the year. Let’s look at some key

Man on the Street: Popping the Pop-Up Pizza Concept Bubble

A few weeks ago, I ran into a friend who makes pizza for a living. She got her start about five years ago and has been busy running pop-ups at bars and events ever since. She told me about plans to shift up from running spotty pop-ups to something mo

Knead to Know: The Art of Focaccia

A guide to the versatile Italian Flat Bread Focaccia Oh, focaccia! How I love thee. Focaccia holds a lot of meaning for me. In the last two years, focaccia has been the one thing that has taught me the most. It has been the one item that I have gone

Super Bowl Sunday is coming this month. I’m sure you’ve already marked your calendars for February 12th. When the NFL’s biggest day hits television screens across the nation, sales of pizza and wings skyrocket. You know the drill, so I’m conf

Don’t blame others for a bad hire. Look in the mirror. We all know the saying about subpar employees: One bad apple ruins the barrel. But if that’s true, why do we as pizzeria owners tolerate the bad apples on our staffs? Obviously, no one wants

How to ace your next health inspection

Pizzeria owners can still sell alcohol for takeout and delivery if they follow regulations Sales of beer, wine and liquor to-go helped many restaurant operators stay in business during the pandemic. These sales were made possible when state governmen

MOTO Seattle, Washington   Concept: MOTO “OddPizza” is a combined expression of all my pizza making experience, mostly inspired by my travels to the night markets in Asia and Europe, where I found unique, quality food from fast, efficient op
Loading...